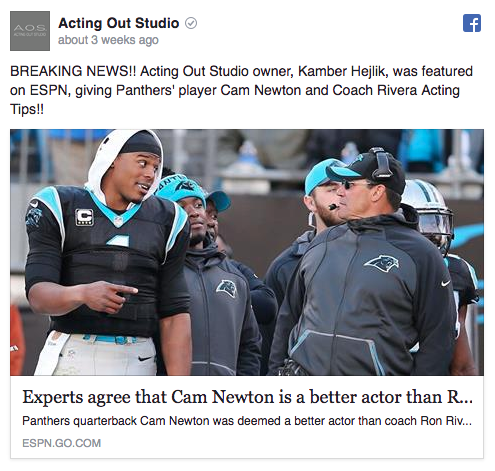 CHARLOTTE, N.C. — So you’re a Hollywood producer looking for a leading man in your next movie. Carolina Panthers quarterback Cam Newton and coach Ron Rivera show up for the audition.

Who do you pick?

“I’m an actor,’’ the 2015 NFL Coach of the Year jokingly (presumably) said on Tuesday. “You can tell by the facial expressions.’’

So why was Rivera critiquing his acting abilities versus those of the reigning NFL MVP after an offseason workout? The subject came up after Rivera was asked what he thought of Newton’s new Nickelodeon television series, “All in With Cam Newton,’’ which premiered last Friday.

Rivera said he likes the show and the message it sends to children who want to follow their dreams. Then he was reminded of his own list of film credits — OK, mostly commercials — and was asked whether he or Newton is the better actor.

Rivera quickly responded, “I think I am.’’

Rivera has spent a lot of time in front of the camera. In 1993, he worked for WGN-TV and SportsChannel Chicago as a television analyst covering the Bears and college football.

Over the past few years, he’s been featured in several commercials for USAA and Mercedes-Benz of Charlotte. Most recently, he was featured in an episode of “Fluffy Breaks Even’’ starring Gabriel Iglesias.

Unfortunately, it went head-to-head with the NBA Western Conference semifinals between Golden State and Oklahoma, so it suffered in the ratings.

But to downright say he’s a better actor than Newton, who besides his new series has been featured in commercials for Oikos Triple Zero yogurt, Beats by Dre and Gatorade, might be taking it a bit too far.

So I reached out to a few acting coaches for a more educated opinion.

J.D. Lewis, the artistic director for The Actor’s Lab, which has studios in Charlotte and Los Angeles, has worked with the casts of “Friends,” “ER” and “Suddenly Susan.” Yes, he’s worked with George Clooney, Jennifer Aniston and Brooke Shields.

According to Lewis, the competition really isn’t close.

“Cam lucked out with the Hollywood smile,’’ Lewis said. “When he has fun and doesn’t take the on-camera work too seriously, he’s got it. He needs to let go of the tension in his forehead and keep his chin down for the camera. And have a bit more fun. Besides that … he’s star material.

“Coach Rivera could make a great character actor, but he needs to relax in his body and not try so hard. He’s a tad self-conscious. I would recommend some improv classes. That would do the trick.’’

Producer and casting director Marci Liroff has cast films such as “Footloose,” “St. Elmo’s Fire,” “A Christmas Story” and Stephen Spielberg’s “ET the Extra-Terrestrial.” She concurs with Lewis.

“Clearly, Cam Newton wins hands down as the better actor,’’ she said. “He’s a natural in front of the camera, comfortable in his own skin, and you can tell he has a joy for doing this.

“On the other hand, Coach Rivera is stiff, self-conscious and is trying too hard.’’

Kamber Hejlik, an actress and acting coach from Los Angeles, moved to Charlotte eight years ago. She owns Acting Out Studio, where she trains actors to be on camera.

She also picked Newton over Rivera.

“Cam knocked it out of the park,’’ she said. “He has a natural ability in front of the camera. He has a likability factor that makes you want to buy the product. He is completely believable, which as an actor is the No. 1 goal.

“My only critique for his [Oikos] commercial is that the girl who says ‘what else’ could have been much better. Maybe that’s because I auditioned for that role and was close to getting it. Other than that I loved it.’’

As for Rivera, Hejlik said he “just needs to be a bit more believable.’’

“I want to see more personality and excitement about Mercedes,’’ she said. “On the other hand, he looks great on camera.’’

Lewis compared Newton to a young Denzel Washington, who has received three Golden Globe awards, a Tony Award and two Academy Awards — Best Actor for his role in “Training Day’’ and Best Supporting Actor for “Glory.’’

Here’s a look at Newton’s work in Nickelodeon’s “All in With Cam Newton.”

Lewis compared Rivera to Joe Pesci, who won the Academy Award for Best Supporting Actor for his role in “Goodfellas’’ but little else.

In other words, Washington gets the nod, just as Newton does.

“For my money, Cam is the man,’’ Lewis said. “I’m predicting a crossover to Hollywood.”