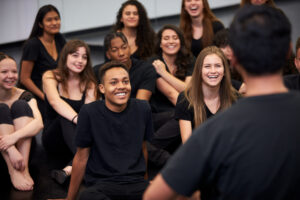 Acting Out Studio was featured on a backstage.com as one of six RECOMMENDED studio spaces by Denise Simon for young actors to improve their talent. Read more below!

I have built my career training young actors in acting and audition technique. In the big cities like New York and Los Angeles, there are countless opportunities for young performers to train and perform. I have students located all over the country, and while it’s nice to come to the big cities for a workshop or a single coaching session, ongoing training provides a vital foundation for young performers. So what are some options for those of you who live outside of the big city? I have worked with theater and acting companies across the country and have been fortunate enough to find many nurturing and professional programs. Here are six great studio spaces for young actors to learn and grow outside of the big cities.

Acting Out (Charlotte, N.C.). Founded by professional actor, Kamber Hejlik, Acting Out brings Hollywood to the Southeast. With three locations around the Charlotte area and year-round classes for children and adults, the experienced faculty has created a fantastic training ground for young performers, many of which have appeared in national commercials, films, and on television. Acting Out is a space for children with professional aspirations to gain world-class training, as well as those with a passion for performing to gain valuable skills.