Get a Little Funny in Your Life | Ballantyne Magazine 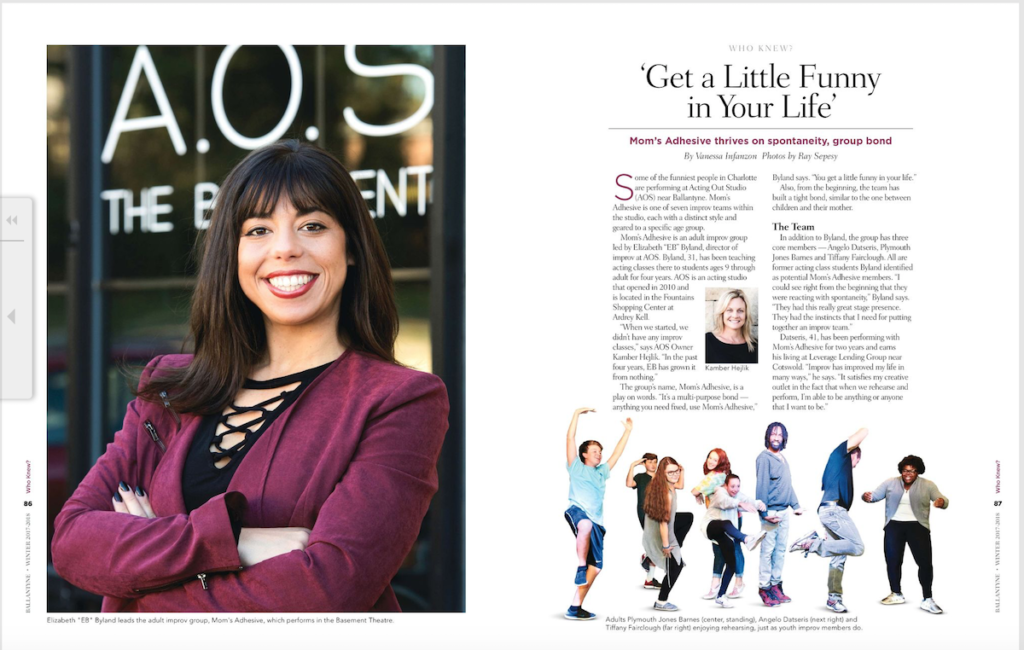 Acting Out Studio was featured in the 2017-2018 Winter Issue of Ballantyne Magazine. Check out the article below!

Mom’s Adhesive is an adult improv group led by Elizabeth “EB” Byland, director of improv at AOS. Byland, 31, has been teaching acting classes there to students ages 9 through adult for four years. AOS is an acting studio that opened in 2010 and is located in the Fountains Shopping Center at Ardrey Kell.

“When we started, we didn’t have any improv classes,” says AOS Owner Kamber Hejlik. “In the past four years, EB has grown it from nothing.” The group’s name, Mom’s Adhesive, is a play on words. “It’s a multi-purpose bond – anything you need fixed, use Mom’s Adhesive,” Byland says. “You get a little funny in your life.”

Also, from the beginning, the team has built a tight bond, similar to the one between children and their mother.

In addition to Byland, the group has three core members – Angelo Datseris, Plymouth Jones Barnes and Tiffany Fairclough.  All are former acting class students Byland identified as potential Mom’s Adhesive members.  “I could see right from the beginning that they were reacting with spontaneity,” Byland says. “They had this really great stage presence. They had the instincts that I need for putting together an improv team.”

Datseris, 41, has been performing with Mom’s Adhesive for two years and earns his living at Leverage Lending Group near Cotswold. “Improv has improved my life in many ways,” he says. “It satisfies my creative outlet in the fact that when we rehearse and perform, I’m able to be anything or anyone that I want to be.”

Byland’s ability to connect with others and build strong relationships has impacted team members. “EB has been my mentor with my acting career for two years,” says Fairclough, 27, a sales agent at Red Ventures in Fort Mill. “She’s taught me and guided me to learn everything I know about acting. She has helped a lot with balancing life and acting.”

Byland’s pride for her small troupe is palpable, and although they were under the radar for the past three years, she’s ready for people to know about Mom’s Adhesive. “I like to think of them as my little quiet storm,” she says.

In long form, improvisers play one or more characters to tell a story. “It’s like the purest form of storytelling,” Byland says. “In long form, you are telling a story from beginning (to) middle and end. You get to experience this really fun journey on stage, totally unscripted, in front of an audience.”

Byland says audience members have messaged her days after a show to comment on moments in the performance and note connections they may not have first noticed. “It has an effect that will stay with you,” she says.

Mom’s Adhesive performs around Charlotte and in AOS’s black-box style theater called the Basement Theatre. Shows are usually on the last Saturday of every month at 8 p.m. Performances are PG-13 recommended, and tickets are $10 each.