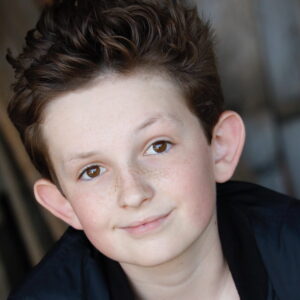 After many summer acting camps, school and community theater productions, and a strong passion for performing, Chandler had the opportunity to attend Talent, Inc. with Acting Out Studio when he was 11yrs.  He prepared for many months with AOS working on his craft and honing his skills.  Chandler loved his time at Talent Inc. attending the many classes offered to continue learning about acting in TV and Film.  He especially loved performing his monologue, improv and film scene.  Upon completion of the incredible workshops and all of the performances at Talent Inc, Chandler was awarded the Gold acting award in his age group.  That evening was one we will never forget.  It was such a wonderful honor to be amongst so many talented children and be recognized for his hard work and talent.

After many invitations to meet with talent agents and managers at Talent, Inc., we were soon on our way to Atlanta, New York and Los Angeles for follow up meetings.  We developed a great team, decided to try out pilot season in LA and we ended up staying there!  Chandler has been so fortunate to have incredible opportunities and has starred in two short films – Cold Embrace and Piano Lessons, tv shows like Shameless, S.W.A.T., Blackish, PEN15, Just My Luck, tv commercials and more.  He also performed a live comedy routine at the famed Feinstein’s at Vitello’s in Studio City, CA.  He is currently working in Toronto on a Warner Bros. feature film, 8-Bit Christmas, to be released later this year.

We are incredibly thankful for Acting Out Studio, Kamber Hejlik and Talent Inc. for helping us navigate this acting journey.