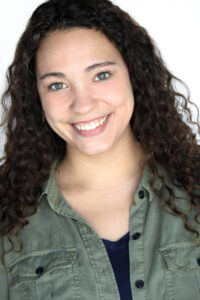 Tasha Davis was raised in Charlotte from an early age, and always knew she wanted to sing. She soon decided to start acting; so she went to Northwest School of the Arts High School where she fell in love with musicals and graduated in 2014.

Continuing performing in college, she graduated with a Bachelor of Arts in Drama, in 2019 from UNC Greensboro after switching from Western Carolina University, where she learned more as a Musical Theatre concentration major. During the pandemic she also got represented by Evolution Talent Agency for film.

Tasha’s learned a lot from her local Charlotte theatre scene at CPCC Halton Theatre, Theatre Charlotte, and Davidson Community Players. She wants to go back to school to obtain a Masters Degree soon, but in her down-time, she enjoys traveling to the nearest beach, enjoying her usual Starbucks caramel iced coffee, and watching old movies!