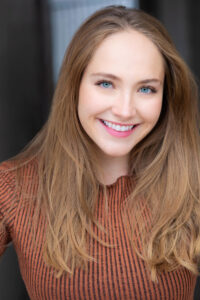 Kayleigh, born outside of NYC, grew up going to Broadway musicals, to which she credits her lifetime love for the stage (and the camera). Kayleigh’s theater life blossomed in Charlotte as a teenager, performing in shows like Legally Blonde, Beauty and the Beast, and The Wizard of Oz. A former student of Acting Out Studio herself, she won Overall Female Actress at Talent Inc., gained representation in LA, and transitioned to TV and film, finding her way onto commercials and network tests of Nickelodeon and Days of Our Lives.

Kayleigh moved to Los Angeles with the desire to learn, where she not only studied Anthropology at UCLA, but trained with Upright Citizens Brigade, The AFA Studio, and Anthony Meindl’s Actor Workshop. Since then, Kayleigh has starred in independent short films and pilots, and an upcoming Lifetime Network feature film.

Trained in evidence-based Mindful Awareness Practice courses, Kayleigh combines deep, active listening techniques with embracing the joy and spontaneity of acting in the moment. Her greatest reward is seeing actors’ growth and trust in their craft. Outside of acting, Kayleigh produces podcasts, writes creative nonfiction, and cooks!