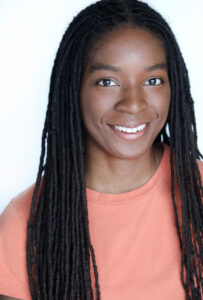 Hannah grew up in a creative family. Her parents instilled a love for the arts in her from a young age, as they started their small music school, The Zion Academy of Music, in Stockton, CA. Between Zion Academy and church, Hannah took lessons in piano, cello, choir, and creative writing. But she got her first taste of theater at age 12 in a church play. It was then that she decided she wanted to act, as well as write and direct. As a senior in high school, she wrote an original play, titled “The Real Story of the Three Little Pigs”, which was performed at Zion Academy’s spring musical theater recital.

Hannah attended Loyola Marymount University in LA as a screenwriting major for 1 1/2 years. Though being behind the camera was her passion, she continued to train in the theater on the side. After transferring to San Joaquin Delta College in her hometown, she wrote and directed her first short film, titled “The Crazy Therapist”.

Though financial struggles stalled her from getting a Bachelor’s degree in film, Hannah continued to hone her skills through local acting gigs, entering screenwriting competitions, and even completing her first mini-documentary in 2021, titled “Siblings”. Hannah’s true passion is storytelling, and she’s working toward her dream of writing, directing, and acting in her own feature-length films.