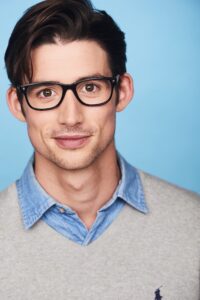 Dexter Masland grew up in the San Francisco Bay Area and did his first play at the age of 5. By 13, he was immersed in school musicals, acting camps and making films with his friends in his backyard. After high school he attended college at The University of Southern California, where he received a B.A in Dramatic Arts and minored in The Critical Study of Film and Television. He continued his training at the renowned British American Drama Academy (BADA) in London.

After completing that program, he returned to Los Angeles and began working as a professional actor. During his 10 years in Los Angeles, he trained at the famous UCB Improv School, and studied under some of Hollywood’s top acting coaches. His first television appearance was on the hit Disney Channel show Dog With A Blog. He then went on to appear on the CW’s Golden Globe Award-Winning show Jane the Virgin. His most recent film, STRAYS, starring Will Ferrell and Jamie Foxx, comes out Summer 2023! Most importantly, his love of acting is contagious, and he is committed to helping others reach their greatest potential.